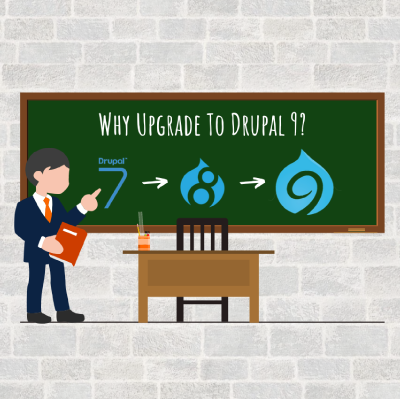 Drupal 9 was launched on June 3, 2020. Given this, it would be necessary for enterprises to upgrade to it later or sooner to acquire complete functionality and retain the ability to receive security updates within the bi-yearly cycles.

In the past, migrating from one version to another has been similar to moving from another CMS to Drupal, bringing in more time and fatigue.

However, the upgrade from D7/8 to D9 is much easier and painless. Let’s dive into more details and understand as to why moving on to Drupal 9 would be a better choice.

Why Should You Upgrade?

With the end of life approaching for Drupal 7 and 8 soon, operating the website on them securely and with complete functionality won’t be a feasible option.

At the same time, it might also be overwhelming for Drupal 7/8 site owners to know that their website will need the upgrade, especially when their site is running absolutely fine; thereby, resulting in confusion among them.

Here are 3 reasons why you should consider upgrading your site to Drupal 9:

The good news for Drupal 7/8 site owners is that even when it goes out of official support in November 2022, remaining Drupal 7/8 sites won't stop working at that point.

Should an Existing Drupal 7 Site Be Upgraded to Drupal 8 or 9?

One of the major reasons that more than seven hundred thousand Drupal 7 sites still haven’t migrated to Drupal 8, is due to the known challenges in the migration process. And with the majority of people on Drupal 7, it is quite likely that most of them did not want to upgrade their CMS twice in the span of one year.

A safe bet seems to be migrating from Drupal 7 to Drupal 9. But will the site be secure? Let’s get to know a few facts.

Since D8 and D9 are similar except for deprecated codes removed and third-party updates in D9, it would be a feasible option for enterprises to migrate to D9 instead of D8 - to save them from constantly going through the same process and investing time, money, and efforts unnecessarily.

There are innumerable capabilities added in Drupal 9 which further will be consistently updated biannually to help enterprises stay up-to-date.

Now once you upgrade your system to D9, you won’t require to make major changes the next time you plan to update it to a newer version.

The essential features of Drupal Headless CMS are-

Additionally, you can also learn from our previous blog where we have explained how to find and fix the deprecated code - Site Owner’s Guide to a Smooth Drupal 9 Upgrade Experience.

Why Remove Deprecated Code in Drupal 9?

With time, the effort is being made to make Drupal better. There are functions that have been around for a long time but will not be a good fit in the latest release. Most were deprecated in Drupal 8.7.0, which will be removed in Drupal 9.

To sum it all, the key to achieving this smooth transition to Drupal 9 is to rollout your migration plan within deadlines and save yourself from any unnecessary hassle later on.

Srijan is working with leading enterprises to help them migrate their digital web properties to Drupal 9 for better user experience.

If you are also looking for a smooth upgrade/migration process for your enterprise’s system, we are all ears and excited to assist you. Contact Us!