Drupal 8 Accessibility: What We Didn't Get in Core 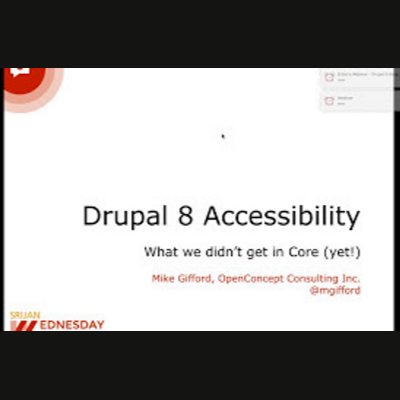 Explore the Drupal accessibility problems yet to be solved

We accomplished a great deal with Drupal 7’s accessibility when it was released in 2011. In Drupal 8, the community built on this and added broader support for ARIA & ATAG, two W3C standards which were not stable in 2011. D8 has also seen many enhancements for keyboard only users, low vision users and people who are colour blind. Drupal accessibility is the best among all available CMS, but there is a great deal still to be done.

We could use improvements in the usability of its aural interface. We introduced animations in Drupal 8, which can cause visually induced motion sickness for some users and we still have no means to address defining acronyms. We also need more to support for voice control. Join the webinar to explore the Drupal accessibility problems we are yet to solve, and which should be a part of core libraries for every CMS.

Do take a look at Mike's complete presentation here.

Mike started OpenConcept Consulting Inc. in 1999 and since then, he has actively worked to give his clients control over their website content. He is very involved in promoting the adoption of more open approaches to working together using the Internet. Mike is a Drupal 8 Core Accessibility Maintainer and an active contributor to the Drupal Community. He has also written the Drupal Security Best Practices guide with a comprehensive view of how to protect your website.