Contributing back to the community has always been vital in Srijan’s culture. We did take a back seat for some time like everyone in the industry; however, it was just a little pause. In the early days of 2020, we set some new year goals and community contribution was one not to be missed. As you read along, you would walk through our journey so far.

In March, Srijan was on the first page of the Drupal Marketplace when we thought to initiate the contribution process. Simply put, we were holding a rank between fifteen to the seventeenth position.

While I started working as a Community Manager in the March-end, I was made responsible for improving Srijan’s ranking in the Marketplace.

Never had I imagined then that such a massive epidemic was at our doorstep.

The COVID-19 pandemic that started in March-end led to the cancelation of all the upcoming events. Further, the extended lockdown worked as a catalyst for increasing the ambiguity among the team members on what to plan in future agenda and how long will it take to end.

An enormous number of employees were put on the bench as the project engagement reduced considerably across the globe due to COVID uncertainties. That’s when it struck us that we should leverage this situation to turn it into a positive opportunity for us. An opportunity where we can learn, improve our position in the Marketplace, and most importantly, don’t let Srijanites feel demotivated due to such unprecedented times.

See what we did to give our best-

As said, hard work pays off; eventually, May & June proved fruitful for us. These were the months when the rank improved drastically, and we were now within the top 5 contributors in the Marketplace globally and at the top position in India. 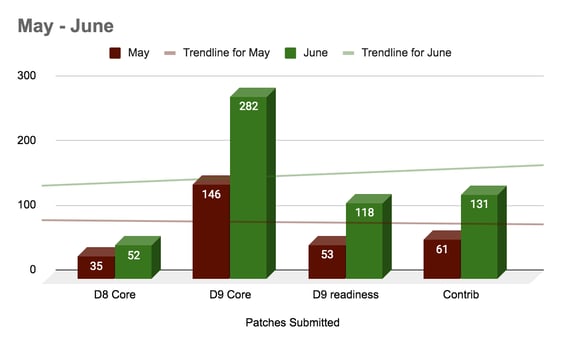 The graph shows the number of patches submitted in total for different Issue types in May & June.

Not only did the teams were proficient by now, but we were also ready with the recorded training sessions and startup guide for the future newcomers to join. We traveled a long way to achieve our goal, but the journey was far more adventurous and taught us things that made our future brighter.

We learned in our journey...

While the teams had gained up to the speed of working for core issues, some unhealthy practices came into the light, such as too many comments on a single issue, or to & fro of assignment and un-assignment, etc., were being followed within the community.

As everyone learns from their own mistakes, so did we. The teams were run through the sessions by the experienced contributors, where they elucidated the best practices to adopt while working on the issues.

To reach our ultimate goal, we were continually putting efforts to maintain our position in the top 5 quality contributors. Below is the graph to help you understand the scenario better

The percentage of Drupal Core Credits with the Total Credits, as of July 1, 2020, for top 4 Contributors.

Our position as of August 12, 2020, i.e., in the second quarter of the year, was 2nd, and maintaining it requires some serious strategic planning and continuous implementation.

The credits are evaluated every 90 days. You may lose the hard-earned position if the constant efforts are not dedicated. Given this, it is essential to foresee things and act accordingly.

This is all about the contribution journey of Srijan in the first quarter of 2020. As George Herbert said, “Where there is a will, there is a way,” we have now successfully achieved the second position in the marketplace.

To know this another exciting journey of ours, where we achieved the second position, you ought to stay tuned for the next blog.

Meanwhile, keep contributing to the community! :)