How Blockchain Technology Can Change Security Landscape in BFSI Sector

The concept of the blockchain that led to the development of the now-famous cryptocurrencies can be traced back to the early '90s when Stuart Haber and W. Scott Stornetta introduced the world to it and Satoshi Nakamoto used it in the form of Bitcoins back in 2008.

Blockchain is a sequential method where the implementation of public ledgers and processing power is observed to have transaction transparency along with keeping a full track record for the previous owner. It is still the most secure way of managing the data as it is not owned or controlled by a centralized authority. The horizon which can be sought with the implementation of blockchain is not merely limited to the digital currency but fields like medical and military are also efficiently gaining momentum based on this tech.

Significance Of Decentralized Processing In Banking

Primarily the large scale implementation of blockchain was observed in the banking and financial sectors which used decentralization for processing, storing and verification of monetary transactions. These industries are the major stopovers that observed quite a tremendous amount of frauds out of which some were detected and rest remained undetectable.

Millions of dollars are invested in a security module but none of the solutions have ever been even close to the performance of blockchain technology. This is a practical solution that has the involvement of public ownership of data which grantees no scam policy.

Today topmost financial and insurance organizations are leveraging blockchain for replacing their traditional processing model. According to a worldwide survey conducted in 2019 for all the industrial segments, it was observed that around 71% agreed that blockchain offers higher security over its traditional counterparts. It is also expected that around $4 billion would be saved globally in cross-border payments. Countries like India which are in its growing phase tend to be giving a trial for this implementation and may need a more convincing ideology for full acceptance of it. 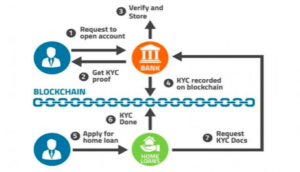 1. "Know Your Customer" While You Provide Insurance

This procedure of accumulating user's information is to bridge the gap between a company's customer data and their actual verified identity, source of income, tax information, and proof of residence. By following a strict code of conduct formulated in KYC policy, the organizations providing insurance can stay one step ahead from the unethical practices which incur a hefty loss of making statements for the company. Spanning the wings of blockchain, a company can get a lift in their KYC procedure to be completed efficiently in a short period and with a considerable amount of low effort.

Once data gets decentralized, any authorized users can update it, analyze the previous financial track records, and build an authenticated client base as per the guidelines issued by organizations.

Srijan also developed a POC for an Intelligent Automation solution for (KYC) validation, to automate some part of the process. The solution employs deep learning, convoluted neural network (CNN) using Python and TensorFlow, OpenCV for Computer vision, and OCR & MRZ packages to scan docs and images uploaded by users and classify them as per pre-programmed categories.

KYC is a lengthy process & must be done only once and made available to all the organizations for their reference, trust-building, and adding significant information to build a unique portfolio for every user. It will be a track record for the companies to refer and not entertain users who have acted notoriously in their past financial journey.

Millions of financial transactions are happening worldwide on any given day and this also leads to the possibility of frauds, taxation theft, money laundering, and various illegal activities. Though not accepted by some countries, there are many nations whose ardent acceptance towards blockchain for the financial transactions has gained momentum. This way transactions can be tracked for its state of current and previous ownership. A digital contract that happens between these parties is stored in an encrypted format, making it impossible for anyone to tamper it.

Further, contractual transactions happen through cryptocurrency medium where the exchange rate is very low and takes place in no time. 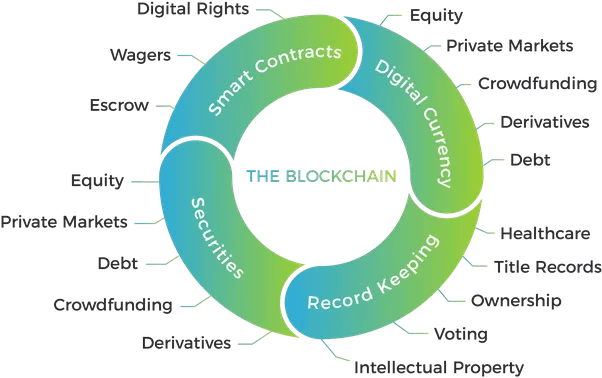 3. Worldwide Effect On The Stock Exchange

When the era of internet-driven market investment started, many companies cheated the investor class by showing high-valued returns. There exist no preventive methods during those initial days but now we are acquainted with the application of blockchain technology in stock trading platforms. Numerous kinds of safety features with interest to investors funds are implemented for establishing a secure environment. Now all the middleware involvements in buying and selling of stocks are eradicated which gave them greater control over the investments made by the user. This is a significant factor as it contributes to the nation’s GDP. Hence, to ensure safe processing, managing, and providing reliable data storage system, deliberate emphasis must be on blockchain implementation.

Centralized banking business requires a great digital power to manage the transactions which happen to be at an extremely higher cost of servers, communication network, application platforms, and security modules. Managing all these is practically a challenging task as compared to the more feasible option of blockchain processing. It helps to serve the transnational purpose through public-key encryption and private-key decryption, moreover, this procedure is done on decentralized node servers which ensures that the transactions are done are impenetrable. The banking organization thus is freed from on-premise management of hardware and payroll software to continuously serve the users.

There is more to the decentralization of data in the blockchain - the concept of private keys for encryption is also prevalent in centralized server processing, but what makes decentralized stands out is its hash-keys which needs to be aligned in a sequential processing of blocks for authenticating the transaction to be processed. Alteration of anything in the chain is not possible as the forward and backward block's references are stored among every node. None of the elements has any disclosure regarding the data storage which makes it impossible for any hacker to creep and manipulate information. This is the future of secure processing and none other tech has surpassed these standards of reliable processing.

An in-depth study revealed that globally 45% of business executives are still observing fraud concerns that are done by tampering the transaction information. These scams have more occurrences in the countries which are deprived of blockchain's presence. Not welcoming the disruptions which are happening worldwide can economically cost such countries to fall behind. Apart from its no scam environment, the government's taxation policy can also be configured in this process flow to make sure all the citizens are following taxation regulation. Tax frauds are the greatest concerns for any country which can be addressed effectively with blockchain processing.

Imagine the world with financial organizations that are deprived of monopoly practices in any region of the world!

Wouldn't it be a great idea to leap into the future of decentralized management where the data hosting and processing power is not under the control of a single entity?

With the diversified data servers and storage units the system against affinity towards every possible system breach. Not only financial but other sectors like medical, military and education are also having a disruptive implementation of blockchain technology which is saving lives and allowing us to build a better society.

**This post is written by our guest author Shy Lee. She's an Associate Digital Marketing Manager at factorHR.

Interested to write for us? Drop a mail at guestpost@srijan.net with your awesome ideas.